Take a deeper look at the 40-year career of Verma Nequatewa, award-winning jewelry designer and stone-inlay master, in this limited edition retrospective. Experience her legacy, rooted in the traditions of Hopi culture, and the beauty of the Sonwai studio, perched on the edge of a rock on Third Mesa, Hotevilla, Arizona — an island mesa in the sky.

More than 100 images of Nequatewa’s most revered pieces are included in this elegant collector’s edition book, complete with silk-covered slipcase, signed and numbered. A work of art in itself, Visions of Sonwai is published only once in limited quantity. 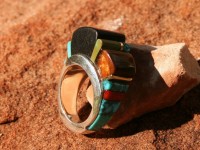