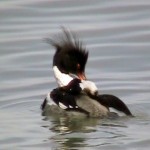 Now in its 115th year, the Christmas Bird Count (CBC) began on Christmas Day, 1900, by ornithologist Frank Chapman, an officer in the nascent Audubon Society, who proposed conducting a census of birds seen rather than a count of birds hunted and killed during the Christmas season. Today, the CBC is the longest-running citizen science survey in the world. It provides critical data on population trends and is performed by volunteer birders and administered by the National Audubon Society. While the first CBC included 25 counts and tallied approximately 90 species, current CBCs amass data from more than 2,300 counts.

On this cold, blustery and early morning of December 27, 2014, Osburn meets up with Gerdts, Waggoner and Acker at Restoration Point on the southeastern end of Bainbridge Island to conduct a portion of the annual Seattle Audubon Society CBC, which includes 14 different locations. Each CBC encompasses a count of species and total number of birds in a circle with a diameter of 15 miles, this one ranging from Seattle’s Pioneer Square, across Puget Sound and including the southeastern tip of Bainbridge Island. An area generally not open to the public, the invitation to join this merry group of birders for the count was an opportunity not to be missed.

Gerdts, Waggoner and Acker have been passionate birders since their youth and lead private and organized group birding tours (some through Bainbridge Island Metro Park & Recreation District) to help educate others about birds on Bainbridge. In addition, Acker has studied owls on the island for nearly 20 years, banding owls and researching their habitats and behaviors, including the Great Horned, Barred and his beloved Northern Saw-whet owl.
For this CBC, the team at Restoration Point counted 65 species and tallied 1,373 birds. Highlights of the count included Canada Geese (and one immature Canada Snow Goose in the flock), Harlequin Ducks, Surf Scoters, Red-breasted Mergansers, Bald Eagles, Red-tailed Hawks, Black Turnstones, California Gulls, a Red-naped/Red-breasted Sapsucker (hybrid), a Peregrine Falcon, and a Spotted Sandpiper. 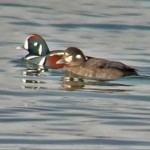 According to Gerdts, in his 30+ years of conducting the CBC at this location, this is only the second time that an orca pod has joined the event. An hour into this portion of the 85th annual Seattle Audubon Society CBC, Gerdts notes: “We’re still in the early stages of this CBC. It’s too early to tell, but we can probably say it’s been a good start. The best thing so far is it’s not raining!”This is the second in a four-part series about birding on Bainbridge. Next up: Winter Owls on a very cold and dark late January morning. Stay tuned.